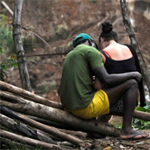 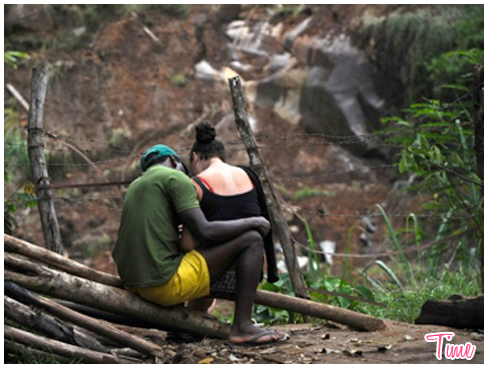 Two days since. Diego had looked for Adriana everywhere, but she was nowhere to be found. He walked around the village once more, climbing over demolished trees, lanterns, parts of cars and houses.

“This house is too small, I need to go someplace where I can actually find a job. Some friends would be nice, too. I’m unhappy, Diego,” she had said. He had simply tried to comfort her: “Don’t worry baby. You’ll find work before you know it, you’ll make friends, and we can look for a better place here. I’ll take you to the carnival celebrations in a few weeks so you can relax a little.” His mind wandered off to the two of them in their small kitchen, talking all morning. He had a vivid memory of Adriana sitting there with her arms around her knees, then uncomfortably shifting her beautiful, long legs. How she let out a small, startled sound.

“Where’s all that water coming from?” Her voice trembled, and they both looked at the shallow lake of water covering the floor. The commotion outside hadn’t struck them before; they had been absorbed in their own problems. Adriana ran to the window and froze at the sights outside. Pale as a seasick seagull, she motioned Diego to come over. Living close to the riverbank in the one-floor house, they had always had reason to worry after prolonged periods of rain. The water was rising quickly. Extremely quickly. They acted as one, and he struggled to get her out the window, up on the roof. He followed her rapidly to where she was standing, still frightened. At least they were together now. Suddenly, the house shook and rumbled. Mudslides tore down everything in their path. People floated like air mattresses in the streams; children were swallowed by the mud, as if they accidentally got trapped in a swamp.

“Diego!” Adriana screamed. Her fall was inaudible in the tumult, the clamours from all the orphaned possessions that were sliding down. Diego screamed at the top of his lungs, struggling to keep his balance while trying to reach Adriana, but she was out of sight before he knew it. Bereft, he clung to the roof, scared, and worried about nothing but her.

And now he was still searching. Suddenly he noticed a girl, sitting on a pile of branches. He blinked twice, but he knew instantly that it was her.

“Adriana!” he screamed. She turned around, and he approached her, exhilarated. Her face was smudgy but he thought she was just as pretty as always. He kissed her dark braids, and put his hand on her cheek, as if to check whether this was really happening.

“We’re moving, baby,” he said, and he wrapped his arms around her. She whispered: “I’m pregnant,” and then cried. His lips touched her cheeks, her perfect little nose, her soft lips, embracing her even tighter. Adriana clung to him.